This past week, I went to the Western Idaho Fair. I’ve always loved going to fairs. I have a box full of ribbons from my younger days when I took items in to show. The atmosphere is so festive and happy. Everyone is displaying their best handicrafts and animals in a friendly competition. The smell of fair food and the barns is all mixed together in a sweet mixture.

The Western Idaho Fair is a good-sized fair. I went with a friend who likes to look around the fair like I do. See all there is to see! The gates opened at noon, just in time for fair food.

Fair food is generally not good for you. I don’t remember ever seeing a salad food truck. Most things are fried (even Snickers and Oreos) and fattening. I started the day with barbeque pork, cole slaw, and potato salad. That’s about as healthy of a meal as I could get there. It was delicious!

We spent the next few hours looking at the poultry and rabbits. They had quail eggs hatching and the baby quail in a separate brooder. They are so small and cute. Several types of chickens were new to me, plus the ducks with fuzzy hats—well, not really hats, but it looked like it.

The horse drill teams were fun to watch as they practiced their formations. We watched a couple of different teams practice. Some riders wore helmets; most didn’t. One had what looked like blue and orange dreadlocks and rode while wearing shorts. I couldn’t help but wonder how chafed she was after practice.

We didn’t get to see many horses because they closed the barn for the horse show. We didn’t watch the draft horse halter class very long, but moved on to the cattle barn. We saw fewer cattle and hogs than expected. The biggest barn was full of sheep and goats. The surprise was a small barn full of Texas Longhorns. One 8-year-old bull was so gentle that the owner’s granddaughter was grooming him. She said at Christmas they put a saddle on him and lights on his horns and ride him in the Christmas parade. 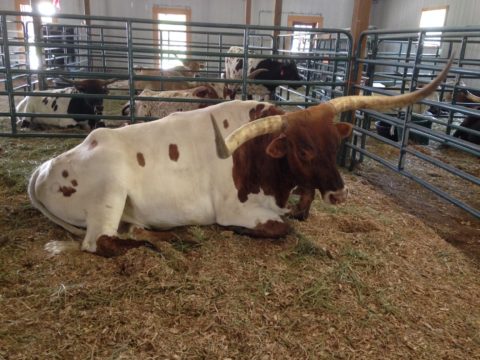 In the heat of the afternoon, we went inside to look at the artwork, canned goods, handcrafts, foods, and other crafts. The building is air-conditioned which felt good in mid-afternoon. So many people have so much talent. How fun to see it all.

We toured the commercial exhibits just to see who was there. By then it was suppertime, so back to the food court area. My favorite fair food is an Indian taco which is a taco salad on fry bread. I topped it off with a shaved ice cup with tiger’s blood as we walked among the carnival rides. Looking at the rides, we talked about how we used to enjoy them, but now they made us sick. Too bad. I might have paid the exorbitant price to ride the scrambler, an old favorite. 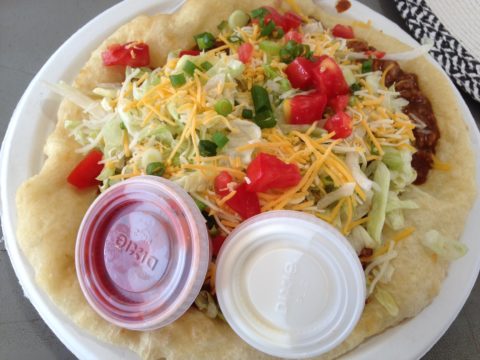 Joan Jett was the entertainment that night, but we didn’t go. We listened to a lady who sang on the free stage as we watched a thunderstorm rolling in. When a cool wind started to blow, we started toward the car. The rain came just as we got in. A great end to a great day with a great friend.