On Monday, the moon will cast a big shadow across the U.S. and millions will be watching. The news keeps talking about it’s the first one since the early 1900s. Not really.

I saw a near total eclipse in 1979 when I was pregnant with Andrea. I was at work in Durango, and the skies had heavy overcast, making us all sad that we’d miss the eclipse. However, the heavy clouds were our eye protection because we could look directly at the sun without hurting our eyes. The whole office gathered in the corner office that had two walls of windows. While it wasn’t a total eclipse, it got dark enough that the street lights came on for a little while. The surreal experience has stayed with me all these years.

Hubby and I are nerds, and we raised our kids to be nerds. We’ve always loved the science of the skies. We went out at night and looked at the stars. We learned a few of the constellations. Observatories or star programs were part of our travel experiences. A trip to the Johnson Space Center is one happy memory of mine and I hope of the kids too.

I thought about going to Weiser, Idaho for the totality, but I heard they were expecting 200,000 people. Not wanting to fight the crowds or traffic, I’ve decided to watch the 99.5 percent eclipse from home. That’s enough for me. Hubby is traveling to a place of totality and my daughter is leaving a place of 75 percent for a 90 percent town in another state. Our son lives in the path of totality. He and his oldest son will be on the roof watching. What a special event to share with his son. It will likely be a forever memory.

Enjoy whatever percentage of the eclipse you will enjoy. Protect your eyes. Look around you at the strange phenomena happening on the ground. Watch the shadows around you. They will look really weird before and after the “main event.”

I wish all of us clear skies on Monday!

Epilogue
The eclipse was an amazing event. As the moon hid more and more of the sun, the sunshine lost its brightness. An eerie glow took its place. Eventually the street lights came, and the shadows on the ground looked very strange. When only a sliver of the sun could be seen, the area was dark, like a moonlit night. It was a strange sort of dark too. Not black, but not light. No stars were visible, but the sky was darker than normal. I didn’t take many pictures. I soaked in the moment and the feelings. So surreal! 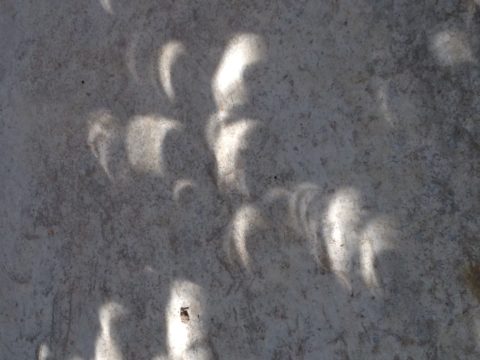